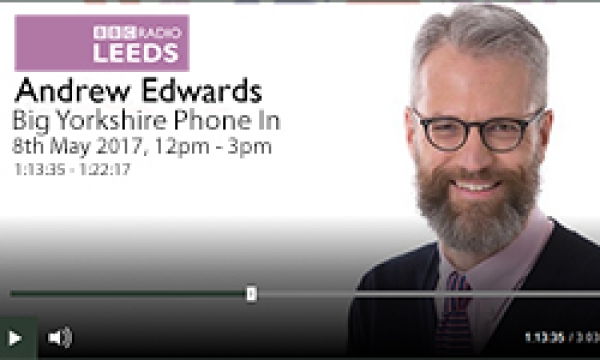 BBC Radio Leeds' Andrew Edwards was talking about fostering on his 'Big Yorkshire Phone In' show yesterday, and he invited our very own Granville Orange to respond to the questions "Is it too difficult to foster children? Is the process of becoming a foster carer too off-putting?"

In support of #FCF17 Foster Care Fortnight 2017 BBC Radio Leeds' Andrew Edwards was talking about fostering on his 'Big Yorkshire Phone In' show yesterday, and he invited our very own Granville Orange to respond to the questions "Is it too difficult to foster children? Is the process of becoming a foster carer too off-putting?"

You can listen to the clip or if you can't listen right now you can find a transcript of Andrew and Granville's discussion below.

AE: Is it too difficult to foster children?

GO: I would hope not. I think the programme’s covering a great topic, so well done on that. I think that rather than off-putting, the process has to be, for obvious reasons, very thorough as a selection process, and a very informative process within which there is a training element. So rather than off-putting I would rather hope to hear that it is a necessary process, put it that way.

AE: I have to say that for many years I’ve been aware that councils are very, very keen to speak to people who want to foster, let’s put it that way. I don’t get the impression there are people queueing round the block to become foster parents.

AE: I have to say you need to be somebody pretty special I think to do it but not special in the sense that you need magic skills. I think of a friend of mine - I won’t for obvious reasons go into a lot of detail - but they do respite fostering so they may have children just every now and again or when things are particularly difficult for their family they will take them in, and I think alongside your own children you need to be pretty special to want to do that and to be prepared to have a flexible family like that, does that make sense?

GO:It makes absolute sense and yes, flexibility and the willingness to take on a job which is a most unusual job because you’re taking in other people’s children, strange children often if it’s a short term emergency placement you might not know very much, if anything, about the child you’re about to offer a home to.

GO: Good question! It’s about people wanting to give something back, in the main, I think that’s the main reason our foster carers get involved. They’ve got a spare bedroom, which is imperative, and they want to give something back and offer a child who’s been through some tough times and in care through no fault of their own, another chance, a second chance, a chance to thrive and develop in a way that they wouldn’t otherwise be able to.

AE: And let’s talk a little about the process because I think, you know, it would be daft to pretend you could have a… “Ooh yeah, I fancy fostering” “Right, you start a week Tuesday”… You know it’s never going to be like that, we’re talking about young, in some cases vulnerable young people, what is the process? Just talk us through, in general terms ,that Granville, because there may be people who, as I have done, have been sitting in the car or on the bike looking at the back of a bus which has got one of those “You Could Be a Fosterer” ads on the back.

GO: Sure, sure Andrew. Yeah, its… there’s a national process so whoever you approach to become a foster carer with, whichever agency you might choose, there’s a national process and that involves, as I said, an informative, thorough selection and vetting which has various stages to it. So you might be invited to what’s called ‘Skills to Foster’ training, which often takes place in an evening or over a weekend, and that’s the chance to hear more about fostering and meet other foster carers who will tell you what it’s really like rather than someone telling you what it might be like. Then there’s a two-stage process. Stage 1 involves the checks and references - medical, the police checks, personal and professional references etc., and then you move on to Stage 2 which is about your life story. Looking at your relevant experience, skills, your home, work, your support networks, your hobbies and interests, relationships, and your own children and how foster children might fit in - if you do have children at home - with your own children because obviously it’s paramount that they’re safeguarded as well as the children that we might be placing.

AE: Now you’ve just talked in very clear language - I think, you know, that everybody will have understood that - but you’ve described a process that, even there, I can see people thinking “Oh blimey that sounds an awful lot to go through for something I don’t need to do, for something I’m doing out of the goodness of my heart” and “Yes, I will have some recompense to, you know, compensate me for the work but also I’ll get an awful lot from it, if it works”, but you can see why people might think “Oh dear, I’m not so sure about going through all of that”.

GO: It is, it is very thorough, but at the end of it, one of the things that most of our carers in Family Fostercare seem to enjoy is that they end up with a biography of their life! Which is quite an interesting thing to do because you wouldn’t do it otherwise. And at the end of the day it’s about safeguarding children, keeping children safe so when Local Authorities are placing children with foster carers they need to know that the home that they’re going to has been appropriately and properly checked, and it’s going to be a safe placement; and not only that but that children will thrive and develop whilst there. So it can’t be… it can’t be a quick process, but there is a time limit and it should take no longer than 6 months. So it’s not going to be next week if you were to phone in today, but it should be no longer than a 6 month process.

AE: And of course it’s different from adoption - although I am aware that sometimes children who have been fostered do go on to be adopted in certain situations - but what’s the minimum, what’s the maximum commitment, if I can put it that way Granville? Because sometimes practicalities are important, aren’t they?

GO: They are. And you mentioned respite care so the minimum commitment is, if you’re interested in occasionally doing some fostering, we’ve got carers who will do maybe a weekend a month and help other foster carers out, and then the other end of that spectrum is you commit long-term to children that, for whatever reason, will not be going home, they’ll be in the looked-after system until they’re 18 plus, and they, you know, they might need a home for the next ten years. So those are the different ends of the spectrum, if you like, and as you mentioned in your introduction, the need - the particular need - at the moment that we find in Yorkshire is for teenage placements, mother and baby placements, and sibling group placements.

AE: And that presumably, I mean, say, if you take the sibling group thing, is people thinking “Well, I might be able to cope with one but two or three, you know, that’s a bit of an issue” so there are some practical factors then?

GO: Sure. Number of bedrooms is critical, isn’t it? Having at least one free bedroom is fundamental…

AE: … And older kids, you can see people thinking “Ooh, you know, that might be a bit of handful, a stroppy teenager versus, you know, a cute 4 year old”?

GO: It…. Yes, yes… It’s ‘horses for courses’, it’s… You know, some people will want to do the younger children from pre-adoption babies onwards and up, and yet we’ve got some wonderful examples in Family Fostercare of teenagers joining us and having their lives turned around and, you know, leaving us at 18 plus as capable, confident young adults.

AE: ......Granville - been very nice to speak to you, and just mention again the particular groups that we’re looking for here in Yorkshire in terms of people in need of a bit of fostering.

GO: Yes, we’ve got offices in East Yorkshire and Doncaster, but the need that we find is for teenagers, mother and baby placements and sibling groups.

AE: Well, it’s been very good to speak to you Granville, thanks very much.